Hey, are you looking for hay? You’ve come to the right place! This is where you’ll find the best hay for guinea pigs out there!

Choosing your little fella’s hay isn’t something you want to take lightly. Picking the wrong hay could lead to health problems.

To make matters easier for you, we’re going to guide you through finding the right hay and we’ll also give you some options!

This post may have affiliate links and as an Amazon Associate & Chewy affiliate, we earn from qualifying purchases.

Why Do Guinea Pigs Need Hay?

Can you imagine that? This is where hay comes in, it’s like a chew toy, basically.

Hay keeps the little fellas chewing To Wear Down Their Teeth so that they stay the average size and not overgrow.

It’s also essential to maintaining the bacteria in their intestines. In other words, it’s good for their digestive system.

Things To Consider When Buying Hay For Guinea Pigs

How can you know which hay to buy? This is what we’ll get into now. We’re going to tell you how to pick your hay, okay? Couldn’t help a little rhyme.

Avoid feeding them clover hay and alfalfa. A lot of people promote alfalfa hay which is quite unhealthy for your little guy.

Lucerne, or alfalfa, contains high levels of calcium, which Could Cause Stones and lead to surgical removal.

It would, however, be safe to feed them a mixture of alfalfa and other safe types of hay.

Alfalfa is also rich in protein, which is why it could be used to feed pregnant or new mommies.

Calcium and protein could give them a nutritious boost to help maintain their health.

Chemicals can be fatal to any of us, let alone the little fellas.

Not all brands mention whether or not the hay is all-natural, which probably means it’s not! You should double-check that it’s free of chemicals to guarantee the well-being of your little one.

How can you know which hay is good and which is bad if you’re not the one eating it? You can put your other senses to use!

When you open up the packet, take a good whiff of the hay. By the smell alone, you could tell if it’s fresh or old. It should smell sweet and strong.

Now, put your hand in the hay. What does it feel like?

You want the hay to be as dry as possible. Moist hay is more likely to grow mold, mildew, or fungus pretty quickly and you don’t want your guinea pig to eat that.

Take the straws out and look at them. Are they cut into little pieces or are they long strands? Short straws aren’t good for the digestive system and might even cause intestinal blockage.

There are 3 different cuttings of hay.

First cutting is for animals who need a high fiber diet, especially those who need to shed a few pounds, no pun intended.

It’s also recommended for animals with dental problems, believe it or not. It’s also low in calcium and protein.

Second cutting hay is ideal for everyone. All of the nutrients are perfectly balanced so it’s good for all ages.

Does your guinea pig refuse to eat hay? Is it elderly or recovering from something? Try third cutting hay! It’s softer than the others, which makes it easy to chew for guinea pigs with health problems.

It could also be used to help them put on some weight.

Third cutting hay is typically rich in protein and calcium and low in fiber. You don’t want to use it frequently unless instructed otherwise by a vet.

How Much Hay Should I Give My Guinea Pig?

No matter what else you feed it, it can’t replace hay. You’re going to need it to be available for your little piggy all-day-long, every day!

The question of how much depends on how much your buddy can chomp down in one day. If you’re looking for an average, you’re probably looking at 1 oz a day.

Kaytee is one of the top hay brands on the market right now. This one is for the foodie guinea pigs out there! Timothy Hay Plus is hay plus dried fruit.

There’s a variety of flavors to choose from. There’s carrot, cranberry, mango, marigold, and mint.

Do you know what this means? It means that if your guinea pig refuses to eat hay, you might have just found a solution!

The variety can be a way to switch up your piggy’s food a little.

Some of these little guys can grow bored of eating the same hay all the time and others don’t like it.

Timothy Hay Plus gives them a little change without having to sacrifice the nutrients.

It’s also a change of texture! They could enjoy chewing the dried fruit for a change.

Needless to say, chewing them would keep their teeth healthy. 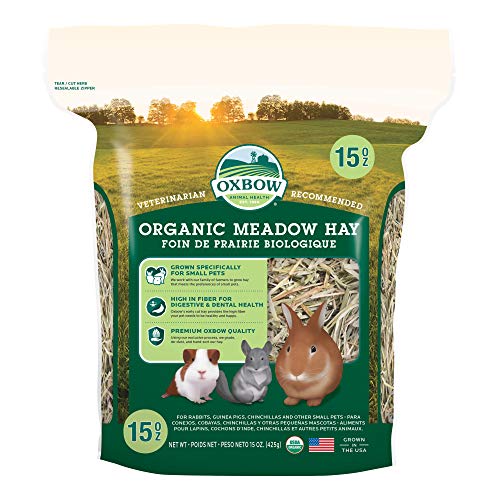 Oxbow Animal Health is another favorite among small pets.

Oxbow hay is harvested from their family farm for your family pet!

This hay is certified organic so you don’t need to worry about whether or not there are chemicals.

It’s 100% natural with zero additives. This means that your little guy’s health should be safe with this one.

Quality should not be in question here.

The sweet smell gives away its quality right away. Add to that the fact that the hay is hand-picked, your guinea pig deserves only the best!

Speaking of sweet, Organic Meadow Hay is just the perfect amount of sweet! On a scale of 1 to 5, 1 being sweet and 5 being hearty, Oxbow Meadow Hay rate their product as a 2.

This means that your guinea pig should enjoy it whether he/she is a sweet tooth or not! 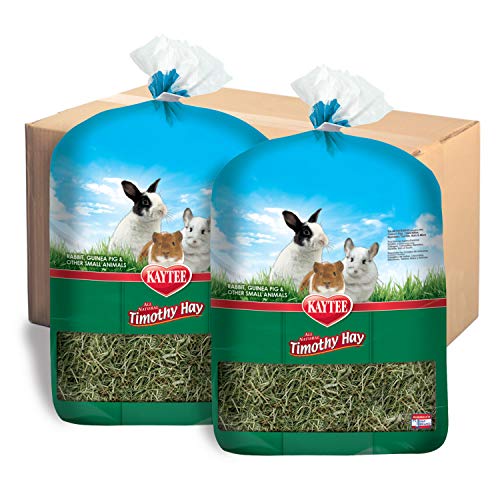 Another Kaytee pick, this is good old timothy hay.

It’s been approved by thousands of small pets, including guineas.

They’re exactly what you should be looking for, with little to no moisture and, by extension, any mold.

The best part is that the strands are hand-picked.

This is the best kind since it means they didn’t lose any nutrients when being selected.

The strands themselves are a blend of both first and second cuttings.

This means that they’ll be rich in fiber to keep your guinea piggy’s digestive system healthy.

The Fiber Content Is 32%, which guarantees your little fella’s going to get the nutrients it needs.

Because too much protein can do more harm than good, protein makes up only 6% of the nutritional value. 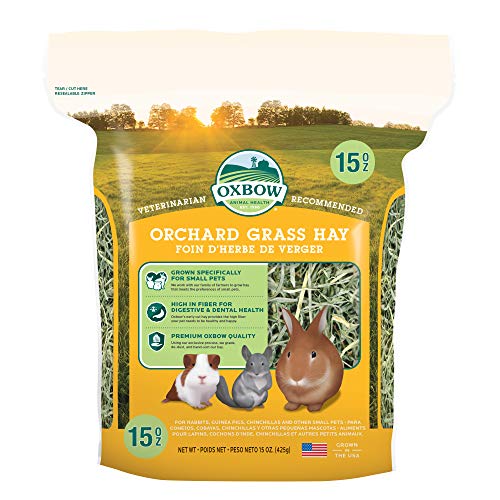 Oxbow Animal Health strikes again! Their orchard grass hay is worth the try at least once!

Orchard Grass is also good for guinea pigs so you could use it every once in a while so that your little fella doesn’t get bored of timothy hay.

This small package is a great option if you want to try the hay for the first time.

You could give your piggy a little taste and see if he/she likes it or not. If not, you didn’t waste a lot of money! 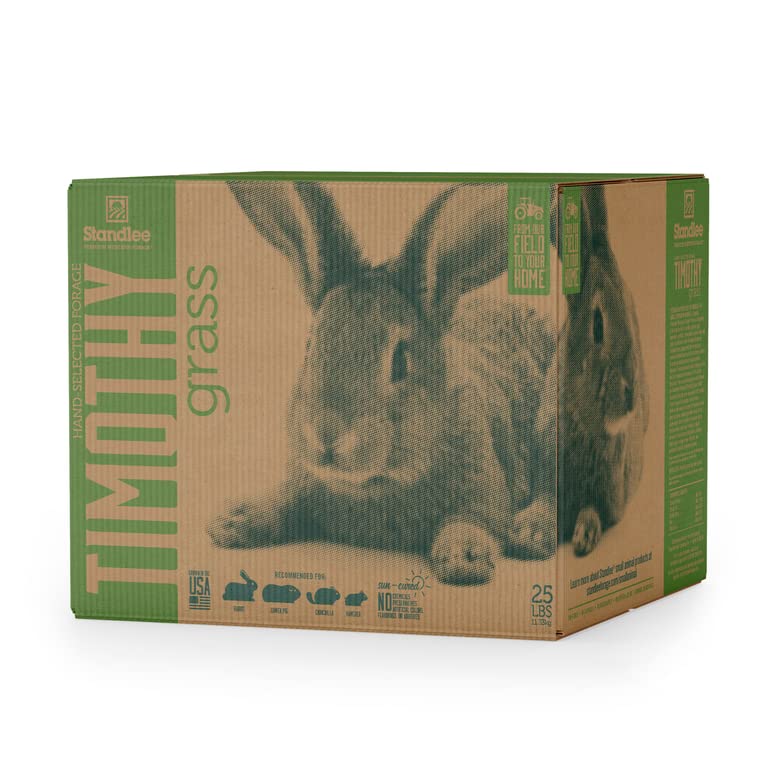 For those of you who want to make the most out of their spending, Standlee Hay Premium Timothy Grass could be what you’re seeking.

The box is 25 lbs. If you divide the cost by the amount you get, you’ll find a massive difference between its price and most of the other hay products.

Whereas this might be a lot for some people, it should be perfect for those of you who have several piggies running around. If that’s you, really think about this one. 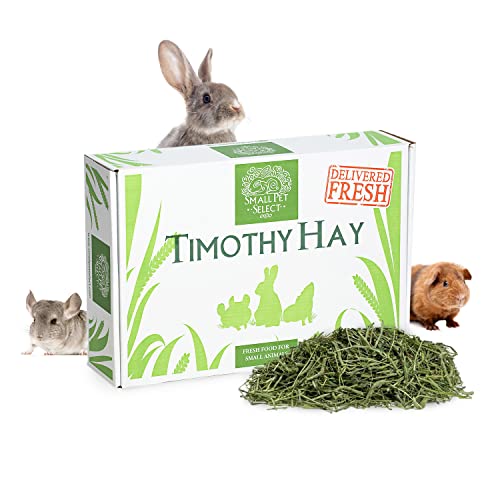 If you’re looking for a specifically balanced diet for your guinea pig, Small Pet Select 2nd Cutting is a great option.

Second cutting hay should guarantee a specific amount of nutrients so you won’t be left wondering.

It’s the standard amount of fiber, protein, and calcium. Unlike most products, you know exactly what to expect from this one.

The seed-head to stem ratio is precisely selected to give your piggie the best of both worlds. This means that you should goodbye to stem-only hay.

Here are some questions other guinea pig guardians are asking.

It’s probably because that particular type isn’t appealing to him/her.

Chances are it probably isn’t fresh or could be moldy.

Try one of our top picks and check the hay yourself before giving it to the little guy. Make sure it’s fresh-smelling, dry, and that the strands are long.

Make sure to supply your guinea pig with fresh hay and not leftovers. Hay grows mold pretty quickly, it could explain why he/she refuses to eat it.

Place the hay somewhere where it’s not close to any water, otherwise it’ll go bad in no time.

You should change your guinea pig’s hay no less than once a day. Otherwise, you could risk it going bad and harming the little guy.

While grass is quite healthy for guinea pigs, if it’s in certain conditions, it’s Not Sufficient To Fully Replace Hay. You could feed your guinea pig some grass beside hay, but don’t fully rely on it.

Have you made your decision yet?

We’re no herbivores, but we think the best hay out there is Kaytee Timothy Hay Plus.

Kaytee provides top-of-the-line, chemical-free hay so quality should be a guarantee.

It also checks all the boxes when it comes to freshness, smell, texture, and so on.

Not only does it provide the same nutrients as any other timothy hay product, but it gives a little extra as well! The dried fruits are like treats for your little fella, so that’s two meals in one!

There, you have it. We wish your little piggy a bon appétit! This post contains affiliate links and I will be compensated if you make a purchase after clicking on my links. Have you ever asked yourself “Can guinea pigs eat Tomatoes?” Is this fruit (even though people call it a vegetable) harmful to guinea pigs? You might have heard that tomatoes have some health benefits for… This post contains affiliate links and I will be compensated if you make a purchase after clicking on my links. Cucumbers can help keep human bodies hydrated while satisfying cravings. The crisp and crunchy green veggie is a great, healthy snack for you and your friends. But are cucumbers just as good for guinea pigs?… This post contains affiliate links and I will be compensated if you make a purchase after clicking on my links. If you’re a homo sapiens who wants to share the joy of eating mangoes with your Cavia porcellus companion but not sure if it’d prove fatal to your little friend or not. Welcome to this… This post contains affiliate links and I will be compensated if you make a purchase after clicking on my links. Being compelled to eat the same varieties of food over and over again is something that all of us, including our pets, equally despise. If you own a guinea pig, a question that is most…